muthupatty- madhurai : Storehouse of treasure
Posted by govinda pai research centre udupi at 8:04 AM No comments:

Book review-Bunts in History and Culture by Dr. B. Surendra Rao

The Hindu : Arts / Magazine : Legacy of artistic splendour
Posted by govinda pai research centre udupi at 5:39 AM No comments:

Posted by govinda pai research centre udupi at 3:00 AM No comments:

The Students of Government I Grade College  Hiriadka under the leadership of Dr Padeklallu Vishnu Bhat visited Hebbarbettu, Kudi Nukkuru, Kokkarne  and unearthed an inscription which  was copied by Dr Jagadish Shetty 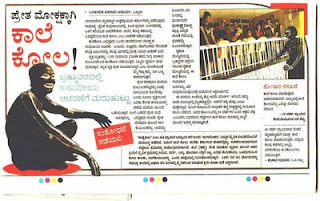 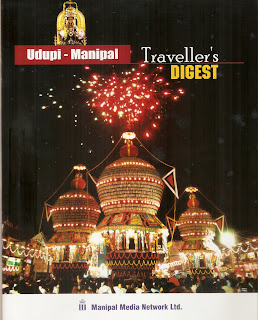 Prof Ramachandra Karkala will be felicitated on June 5, 2011 at Bhuvanendra College, Karkala– a preliminary meeting was held under the chairmanship of Erya Laxminarayana Alva in Erya Beedu, Bantwal.
Sunday 27, March 2011

March 5, 2011:  An assembly of contributors to Vidwajjivita – a compendium of critical articles on the books/works of Dr G. Venkatasubbiah published by Govinda Pai Samshodhana Kendra – Dr. Padekallu Vishnu Bhat, Ambatanaya Mudradi and others shared their experiences in the 77th Sahitya Sammelana held at Bangalore on Feb 4-6, 2011.

A folk festival named Desi Utsav was organized by the Regional Resources Centre for folk Performing Arts Udupi in collaboration with MGM College, Yakshagana Kendra, Academy of General Education Manipal and the State Tourism Development Corporation. The purpose of this folk festival was to present the ritualistic art forms of Kerala Folklore to the interested audience of coastal Karnataka so that they can compare the ritualistic arts of Kerala with those of the part of coastal  Karnataka named  Tuluva Region. Both these cultural areas have developed different forms of spirit worship, serpent worship, ancestral worship etc wherein they employ elaborate floral designs, dance  rituals possession cults, trances and interactions of semi divine beings and devotees, consolations, warnings, prophesies etc.

For this demonstration four troupes of artistes from different parts of Kerala were invited along with some scholars like Raghavan Payyanad. Ritual parts like poojas, chantings  etc were not elaborately shown as they should be conducted only during ritualistic contexts. Drawings of designs, mandalas etc as well as the dances were elaborately shown by the artistes.

Some Yakshagana plays were shown to the visiting Kerala artists.

The programmes were well attended by the intellectuals and researchers of Udupi and the general public. They also had several occasions to interact with the Kerala ritualistic artistes and exchange ideas. The four days’ events were a great success, as they were informative and entertaining.

The first day’s performance was Mudiyatta ritual dance. It was performed by Sri Vasudevan and party from Palakkad.

This Universe is pervaded  by different kinds of spirits. They move about in the sky and they cast benevolent  and evil influences on the living beings. They are named differently like Karinkutty, Parakkutti, Kutticchatan, Bhagavathi, Hanuman Kutti, Veerabhadra, Bhairava etc to name a few.  The ritual formalities  were arranged as per the system Uttama and Madhyama (best and medium). The Ancestor  spirits moving around the sky join with these spirits. They should be propitiated together. When satisfied, these spirits along with ancestor spirits grant the desires of the devotees like progeny, family welfare, prosperity, long life and health etc. Floral  designs are drawn and decorated with plants, flowers, leaves and objects of food in the forms of grains, coconut and fruits. Elaborate ritual dances are shown. About ten artists dance around the design. In the first part seven artists performed various kinds of dances in ordinary dresses and costumes. They showed acrobatics and warrior dances. An oil lamp was also hung from the shoulders of one of the dancers. They get into a trance and get possessed. In the second part three dancers come with head dress and shining costumes and dance and deliver the message of the spirits. Different kinds of food offerings were made to the spirits and ancestors. Rice, Coconut, puffed rice fruits were offered and being satisfied they came out of trance.

The second day’s performance was of the ritual known as Kathianoor Veeran Teyyam. Just like the heroic spirits of Tulunad Koti Chennayya, Koddabbu, Koraga,Taniya Bobbarya etc they have in Kerala also some brave heroes or the benefactors of  mankind who became spirits after their tragic death. They were also known as Cultural heroes and benefactors of the society. Kathianoor Veeran was born and broughtup in North Kerala. His childhood name was Mandappan. He was a lazy boy interested only in hunting. He was always scolded by his father for his laziness. But he was pampered by his mother. Finally his father snatched away his bow and arrow and banished him from his native place. Mandappan then went to Coorg and stayed in a village named Kathianoor along with a relative. He made a living by selling oil. Once when he went out in connection with his trade he met a woman named Chemmarathi and married her. One night when he came home late his wife cursed him saying he would have a tragic death and his body would become food for birds and animals.

When robbers attacked the villagers and took away their cattle Mandappan fought with them and saved the villagers. But during the fight his ring was stolen and a finger of his cut off. When he returned in search of his ring and finger he was murdered by the robbers. Relatives came in search of his body and when the body was cremated his wife jumped into fire and joined her husband in heaven. After this tragedy his soul became a spirit and  since then he has been worshipped by the village folk and even now the propitiatory rituals take place. In the annual propitiation ceremony a floral design is made  with offerings and  the spirit diviner, possessed by the spirit, performs dances going around the floral design. The dances display acrobatics and heroic feats and Kalaripayittu poses and war movements.  After the dance for about two hours the artist gets possessed by the spirit and in the second part of the performance he puts on costumes appropriate to the hero and wears a round headgear around his head and performs dances in a violent fashion. Then the spirit is pleased and blesses the devotees. This dance ritual is performed by the artistes of Vannan community.

The decorated round-shaped head dress and costumes and heroic dance provided a feast to the eyes of the audience.

The ritualistic form presented on the third day is known as Valiya Nagakalam. The big serpent design (mandala) comparable to our full Nagamandala. We have in Tulunad  full Naga Mandala, half mandala and one fourth mandala depending on the size, decoration and ritual formalities. In Kerala also different floral designs in five colours are drawn. We have there astha Naga Kalam, Santana Naga Kalam, Nagaraja Kalam, Anantha Shayana Kalam, Bhasma Kalam, Sudarshana Kalam etc etc. depending on design, colour, shape and ritual formalities. Different kinds of  dance rituals like sarpan tullal, sarpa teyyam etc. are performed. The rituals are performed by a community known as Pulluvar. During  the burning  of Khandava vana half-burnt  serpents fell on the western coast of India and one Namboothiri woman nursed these serpents.  She is born as a pulluva woman and she is blessed by the serpent gods and authorized to perform sarpa rituals. The pulluvas propitiate serpent gods in different ways. They chant the epics and glory of serpent god. They draw sarpa mandalas of different shapes and dimensions. They dance around the mandala by holding burning torches, get possessed and fall into trance and roll on the mandala. The Pulluvars and the devotees participate in the dance ritual.

In the demonstration, the pulluvars made a design of naga kalam by drawing a circle of about 8 to 10 feet diameter and inside the circle many designs of serpents were drawn. Hundred and one- figures of serpents were made. Then after a small pooja and offerings the Pulluva males and females sang serpent epics using pulluva veena, a violin like instrument, eletaala (a thin leaf shaped cymbal) and Pulluva ghatam (a drum –like instrument made of mud). Then they danced around the mandala, holding a torch. Many heroic steps were employed and ferocious forms of serpents were displayed.

On the  last day Guliga kalam and Teyyam were performed. Guliga is a ferocious spirit. Ferocious dances, big headgear, feeding on a live cock etc are the highlights of this performance. But during the demonstration only floral design and violent dance were presented. A square shaped design was drawn on the platform using five colours. In the preliminary rituals the artist impersonator is decorated with tender leaves of coconut tree and a gown made of the tender trap performs a dance and goes to trance. In the second stage a big head dress of 10 feet made of coconut leaves is mounted on his head and torches of dry leaves of coconut were fixed in different places in the head gear and also tied around his body etc. Then he performed the dance ritual in serpentine movements and running around the audience. Heroic steps were displayed and finally the impersonator was calmed down.

This ritual is performed to ward off different forms of fear complex among human beings. It is also performed for the protection of cattle. Guliga is believed to have born on the thumb of God shiva. Hence he represents God Shiva. The ritual is performed in Taravad houses (houses of landlords). During demonstration, rituals were performed by the members of Malayan community.

The four days performances enabled Udupi audience to have a glimpse of the ritualistic art forms of Kerala.

Posted by govinda pai research centre udupi at 12:22 AM No comments:

Posted by govinda pai research centre udupi at 12:18 AM No comments:

Posted by govinda pai research centre udupi at 12:15 AM No comments:

Posted by govinda pai research centre udupi at 11:27 AM No comments:

Posted by govinda pai research centre udupi at 11:26 AM No comments:

Posted by govinda pai research centre udupi at 11:26 AM No comments:

Posted by govinda pai research centre udupi at 11:25 AM No comments:

Posted by govinda pai research centre udupi at 11:24 AM No comments:

Posted by govinda pai research centre udupi at 10:57 AM No comments:

Posted by govinda pai research centre udupi at 10:56 AM No comments:

we are in
Indiae.in
Karnataka